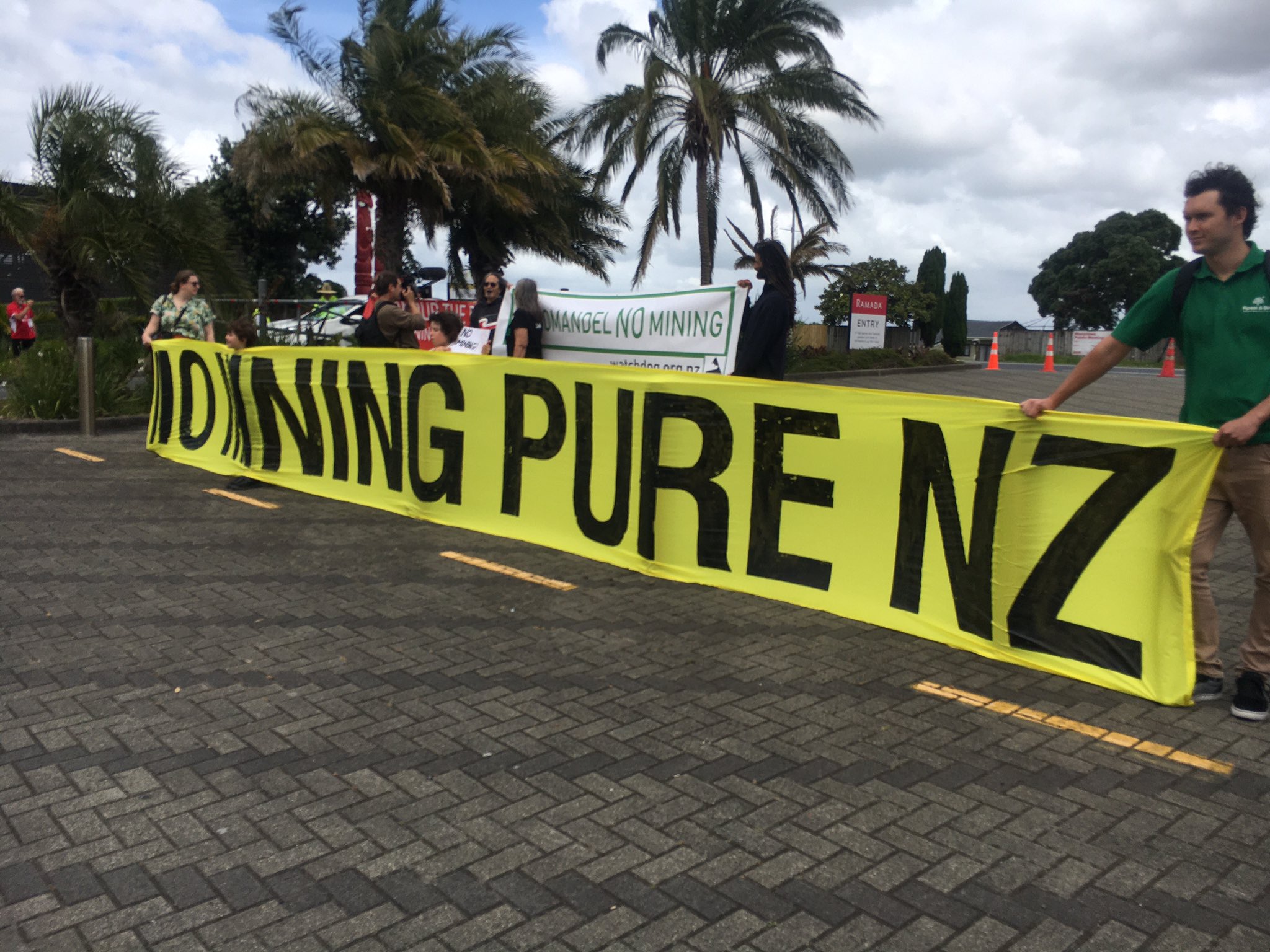 On Sunday November 6 a small team of Watchdog people and some tangata whenua travelled up to Manukau to protest outside the Labour Governments AGM and Conference.

We had arranged to meet Forest and Bird and Greenpeace outside the venue. We parked up amidst hundreds of cars despite being questioned by security. They only got more curious when they saw our matching T shirts. We unfurled our great new ” Honour the Promise” banner beside the courtyard of the building where delegates were taking the lunch break, and started chanting ” what do we want ? no mining, when do we want it ? now!

Naturally this caused the police to panic and they made us move up to the space near the road where Forest and Bird were setting up the big banner that led the march against mining in 2010. We were still within earshot of the Conference Centre and made our presence felt. It was a very windy day and somewhat unpleasant but we did attract some media and some Labour Party delegates.

The conversations were revealing, the Labour Party members who talked to us mainly supported us and also could not see why the Government hadn’t honoured the no mining promise. They said they would raise the issue in places like Young Labour and the Environment Committee. I met many old mates from my Parliament days who were friendly if somewhat helpless in face of the challenge.

Several hours later, sustained by some bluberry miffins I had made (completely out of character) and cold water and quality chocolate, we prepared to hand out information to the delegates as they left the event. At this point the police got very tense about me talking to Labour Party people in the courtyard, even though we knew each other, and forced me and independent film maker Chris from Deerheart Films back up the hill.

However we had certainly been seen by many people and I had a useful chat with the Foreign Minister who is the Hauraki MP. The commitment of Watchdog people and our allies is essential and we drove home happy that we had brought the issue to the Conference and stood up for the whenua. As Denise Messiter from Hauraki said “we’re sick of this, leave Maōri land alone and dont come to Hauraki and dump your rubbish on us”.

This week or next week Eugenie Sage’s no mining on conservation land Bill comes to the House for First Reading, so watch this space for an update of whether the Government supports the Bill to Select Committee or kills it dead!