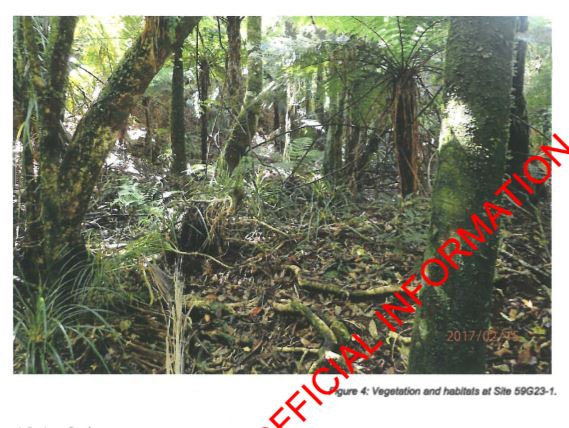 An Official Information Act request by Coromandel Watchdog of Hauraki shows that Oceana Gold have been trying to put more rare Archey’s frogs at risk on Department of Conservation land in the southern Coromandel.
The OIA shows that Oceana Gold had approached the Department of Conservation to propose a variation to their Access Arrangement that would enable them to drill in areas known to be prime habitat for the threatened Archey’s Frog. The company proposed funding research and translocations that they felt would ‘offset’ the impact on the species from their drilling.
Currently Oceana has been able to drill holes on sites where up to 5 of the rare frogs have been found.
“They are already destroying habitat for up to 5 frogs per drill site and the OIA shows they wanted the right to relocate the species with no guarantees that the frogs could survive relocation. Offering funding to DOC and suggesting that an endangered species which relies on a very particular habitat should be moved shows they should not be allowed to drill there at all.” says Augusta Macassey-Pickard, spokesperson for Coromandel Watchdog.
“Tangata whenua has identified the Archey’s frog as a taonga; it is threatened and internationally significant. It is only found in a very few places. It is tiny. Drilling holes, clearing helipads and base camps in beautiful remote forest is not the way to protect these special creatures.”
The Department of Conservation has reviewed the reports, and they have indicated that they would not recommend varying the Agreement. Survey reports obtained by the group, clearly show that the area has a far greater population that originally thought.
Coromandel Watchdog are very pleased to hear that the importance of this area has been upheld. “The access agreement Oceana Gold has with DOC up for renewal shortly and we urge DOC not to renew it. This company has shown their ignorance of the habitat and their lack of understanding of threatened species. Oceana is a risk to conservation. They have done enough damage and their plans for mining in this habitat are a waste of time. “
This is a view supported by New Zealand’s leading expert on New Zealand’s amphibians. Professor Phil Bishop Co-Chair IUCN Amphibian Specialist Group says that translocating the frogs would be risky at best and unnecessary.
“If there is a good area for threatened frogs then the best conservation outcome would be to protect that area rather than thinking it would be a good idea to translocate the frogs – where to? How do we know if that area would be good for the frogs?”
The area is part of the Coromandel ecological area, an area that CWOH has been working to have added to Schedule 4. This obvious lack of understanding of the significance of this area demonstrates why Schedule 4 protection should be extended and why mining on Conservation land must not be allowed