As of January 2021 there are 16 active permits in the Hauraki Coromandel area, including one Mining Permit. Most are held by Oceana Gold Corporation (including the Mining Permit), a large multinational (Canadian and Australian) mining company.

Others that also hold permits, include New Talisman at Karangahake and Pacific Offshore Mining Ltd who have a permit 2kms off Waihi Beach. Other permit holders are: Hawkeswood Civil Ltd, Rahu Resources (New Talisman owned), Laneway Resources and Broken Hills Historic (although this may be being bought by New Talisman (March 20210)).

In Hauraki Coromandel, the primary target for mining companies is the precious metal, gold; there is a lot of gold in the Coromandel Range. A range of other metals are usually listed on the permits also, including silver, copper, rare earths, iron sands and many others. 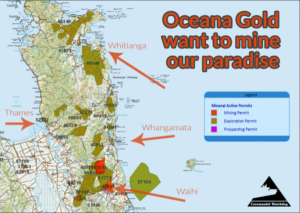 Summary of permits and permit areas from the South to the North:

Waihi – a number of permits held by Oceana Gold Corporation – an Australian/Canadian company. These permits include the open pit mine, and underground mines including those underneath residential homes. Also home to two vast toxic tailings dumps/impoundments, that will remain the responsibility of the community once mining winds up ant the company leave.

Last year the company announced a new mine underground (under the existing pit), a second pit mine, a third tailings facility and rock storage dump. Consenting for this is expected to start in 2021.

Waihi Beach/Bowentown – A huge offshore permit, for gold but also iron sand. This is held by a company that also operates permits off Taranaki, Pacific Offshore (owned by CASS Offshore Mining).

Karanagahake – Australian minnow miner New Talisman has aggressively reopened this historic mine, despite significant and ongoing community opposition. The area was once a mining site, but in modern times is one of Aotearoa New Zealand’s most popular tramping spots.

Wharekirauponga/Whangamata – one of the most concerning, this permit has seen Oceana drilling in Significant Natural Areas on Conservation land – areas that also happen to be a core habitat for the Archey’s Frog, the worlds most threatened amphibian. In 2020, the company applied for a Mining Permit over this area, which they were granted. They quietly announced (via their website investor info) their plans to mine this area.

In late 2020 they equally quietly published on their website a plan for a tunnel that would enable them to further explore and mine under the conservation land here – a tunnel that would go from private land some 6.8km under DOC land to the area – including underneath streams.

Opoutere/Pauanui – Oceana again, they have indicated intention to begin drilling here in the first quarter of 2019. This area is also in forestry.

Puketui/Broken Hills – Here there is a ‘Special Purpose Mine’ – a tourist mine operated until 2021 by the Rabone family. The family has just sold this permit/mine to New Talisman Mining Ltd, the company that are looking to reopen the Talisman mine at Karangahake. This permit is surrounded by further exploration permits held by Oceana Gold.

Kauaeranga – Oceana Gold have this permit also, which is split in 2 – half being around the Puketui area, the other in the Kauaeranga Valley..

Moanataeri – an offshore permit held by Hawkeswood Civil. We know little about this permit; it has been active for some time but we have seen little activity in the area.

Tairua/Whenuakite – Oceana Gold hold this permit also, mainly across private land. Here they are looking at an area that has not previously been explored for gold. This permit comes close to some of our national treasures Hot Water Beach and Cathedral Cove.

Whitianga/Kuaotunu – Oceana again. This permit covers the hills behind Whitianga township and covers a mix of private and conservation land across to the Kuaotunu peninsula and to Te Rerenga behind Whangapoua.

This link will take you to an interactive map of Aotearoa New Zealand.
Use this map to view permits, and who holds them. You can scroll in to each area to have a clearer idea of boundaries. Use the top right hand menus (‘basemaps’ and ‘tools’) for more detail – basemaps allows you to choose what map underlies the permits – we find the LINZ ‘TopoMaps’ good for getting your bearings. In the ‘tools’ menu the ‘identify’ tool allows you to click on a permit and see more detail of that permit – including bringing up a link to the permit documentation itself.