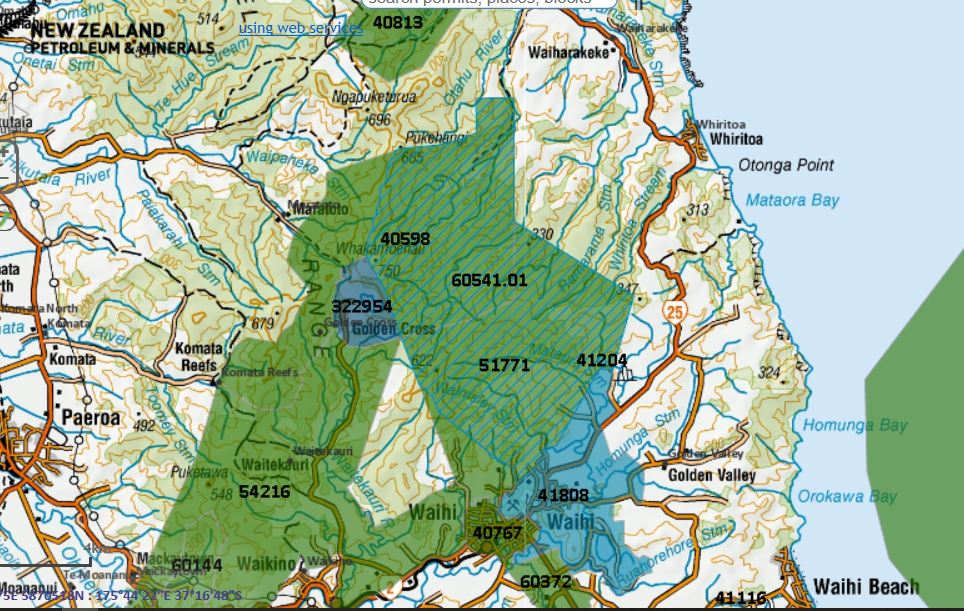 Last week, Oceana Gold, the multinational mining company that operates the two biggest gold mines in New Zealand, applied for a Mining Licence over more than 5000 hectares of mostly Conservation land in the Southern Coromandel.

This is the first permit for many, many years – maybe even since the Waihi permits. It is also a huge area – 5124.77 ha to be precise. The Waihi permit is just under 1500 ha, Macraes even less. Neither are over Conservation Land. The area, just to put it into context, is more than twice the size of Rangitoto Island, 3 times the size of Great Mercury or 66 times the size of the Auckland Domain!

Many, many people love the Hauraki Coromandel. And many many species live here – including a range of rare and threatened species of bth flora and fauna. The Coromandel Range, which runs from Mt Moehau to Mt TeAroha is a significant ecological corridor, providing vital linkages, habitat and of course a stunning backdrop to some of the worlds most beautiful beaches.

This application to mine a significant part of this area is horrible.

It completely undermines what the communities of the Hauraki Coromandel want, what we have been vocal about not wanting for more than 40 years. We are not a minority; we are the community of this place, the people who live here, who work here, who look after these special places. We are the ones volunteering out on trap lines, initiating revegetation projects, guiding our Councils to protect these areas – Wharekirauponga was identified in the Hauraki District Plan as a Significant Natural Area, meaning that it is special within the District.

It undermines what the Government has said, that this area should be fully protected. They have a clearly stated intent to prohibit any new mines on Conservation land. They have long promised to protect this area. Just because they have been ridiculously slow to act doesn’t negate the fact that they have identified and stated this, repeatedly.

Only a matter of weeks ago, Oceana were alluding to any application for a mining permit being a long way off – up to 8 years away. Weasle words from an industry hell bent on grabbing all of the wealth they can.

And what of the toxic legacy that they would leave? The acid mine drainage, the hydrological changes, the geophysical change and instability that underground mining brings; the industrialisation of wild spaces, of conservation land, fragmented habitat, and vast capped pockets of toxic waste – assuming that they remain capped, that we don’t have an earthquake that releases it!

Then there is the Climate Crisis – mining has high energy consumption, requires a range of industrial chemicals and is reliant on the use of heavy machinery. Not conducive to a ‘just transition’ or our nations goals of Zero Carbon.

The gold mining industry is by its very nature unstable, high risk and volatile. The recent decision by the Minister to decline a huge property purchase to enable to establishment of yet more toxic tailings saw the industry and a few others crowing about the wealth that Oceana has bought to Waihi, how the average mine salary is $120k. That’s the average – in other words, there may be 3 people with massive pay packets and loads with tiny ones, but it averages out ok. But where is any evidence of that wealth – Waihi is an inherently poor town.

And then you have the uncertainty of the Industry – the volatility of the gold price and the response of companies like Oceana to that – it was only two years ago that mines were to be ‘mothballed’ as the gold price dropped, workers laid off. Or the pit-wall collapse at Waihi, workers laid off. And in a place like the Coromandel, how many unemployed metallurgists are sitting around hoping for work? How many geologists, or other skilled miners? A few truck jobs (of which there are already plenty, actually) are about all that’ll be on offer. Maybe security. And do we have awfully high unemployment? No. Not like Waihi!

So to sum up, this company wants our blessing – or at least the Governments – to mine our conservation land. What say you?